What Do You Do When Everyone In A Country Wants Your Money? 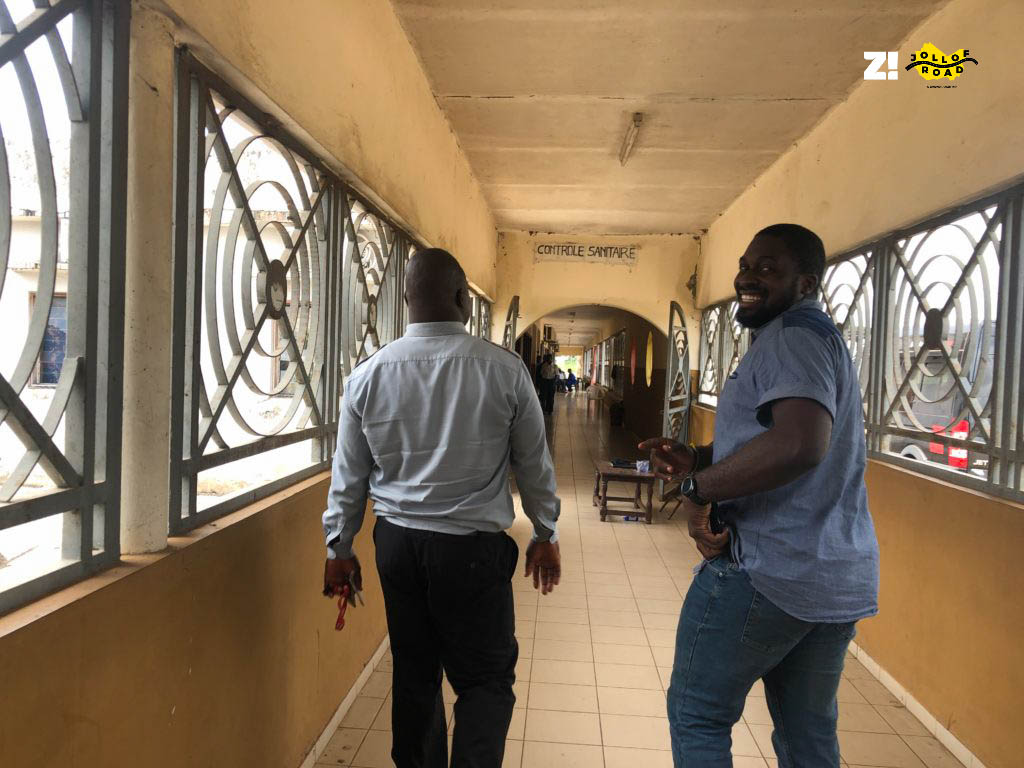 The road from Freetown to the Guinean border is pleasantly tarred and bump-free. We all savoured the ride and got as much sleep as we could in preparation for Guinean roads. We had been warned by every Sierra Leonean we came across, that the roads were very bad. We didn’t want to think that they could be worse than what we experienced in Liberia.

When we got to the Sierra-Leone/Guinea border, we realised that both countries shared a single building as their border. This was the very first we were witnessing that kind of harmony. With every other country, you had to get out of your car to perform the routine of crossing the first border, get back into your car and drive a couple of kilometres before you were able to cross the next border. I assumed that the two countries sharing a building was to ease the immigration process but that was not the case.

After we got our passports registered by a man in too tight carrot pants and sneakers instead of a uniform (who we assumed was an officer because he asked for our passports and sat in an office) we were accosted by Mohammed who is neither a customs or immigration officer. He told us he was a MINES officer and that he had to search our boxes to make sure we hadn’t smuggled diamonds out of Sierra Leone.

As we explained that we didn’t realise this was part of the process, his sidekick walked up to Fu’ad and asked us to just pay some money.

“That’s not going to happen,” we said to him and told Mohammed he was welcome to search the bus.

He walked out with us, but we didn’t realise he didn’t follow us all the way. When we returned to ask if there was any problem, he told us we had to bring our boxes into the building. Fu’ad explained that we were travellers packed for an 80-day trip. He tried to plead with him, but Mohammed’s facial expression didn’t change. He completely ignored Fu’ad. He had custody of our passports, so it was clear that we had two options: settle him or go get our boxes.

So we went to get them. He started with Fu’ad and made him empty his bag. He tried to make the process laborious, smugly dishing out orders with only a few words and lazy hand gestures. “Open that”, “move that”. When it was my turn, Kayode helped take everything out. He then instructed me to open every little purse and satchel. At that point, another immigration officer had gotten wind of the fact that we are being held hostage. She took our passports from him and stopped short of admonishing him.

It’s not a good look in front of foreigners for her to question his authority. No longer in possession of our passports, Mohammed’s search lost its steam. He half-heartedly went through my second box and simply accepted when I told him it was all clothes. He barely went through any more bags or boxes. We returned our boxes and made way to the woman who had taken our passports to be stamped. She was complaining to a superior officer about Mohammed’s behaviour. She said it was a bad look for Salone.

As difficult as Nigerians?

When you walk past this gate, you can fill the shift in the atmosphere even though it’s the same building. The uniforms change, you start to hear people speaking in French and most importantly, the demands for money begin.

It started with getting kicked out of the immigration office for typing a note on my phone. The immigration officer yelled angrily in French and for a second, I was confused until he said in broken English that I should get out of the office for using my phone. I immediately stopped and started to say my ‘pardons’. This only agitated him further; he got out of his chair yelling and insisting that I still had to leave the office. The rest of the gang tried to intervene but I left anyway.

Fu’ad stepped out confused. He said he was also using his phone right next to the man. I’m not confused though; I’m used to dealing with men like him. His behaviour isn’t foreign to me We were still talking when we heard Tosin’s raised voice. She was engaged in a little shouting match with the same officer who just kicked me out. It ended with her walking out as he shut the door behind her. Our passports were still inside. What’s wrong we asked?

The problem wasn’t the amount of money he’s asking for. The problem was that he was asking to pay for a document we already had. When Tosin asked what the money was for, he told her not to ask him any questions. And I began to wonder, does he have a problem with women?

Getting into Liberia had involved crossing into Guinea first and sorting out all the car documents which Captain had said would make things easier when we eventually came back to Guinea. But this was not the case as the man in charge clearly wanted money. When we returned to his office and Fu’ad spoke, he calmed down a little. So apart from being an extortionist, he was clearly sexist. We ended up paying the 150,000 Guinean Francs for the car document we already had

The rest of the process was drama free. We spent a total of 80 minutes at the border. When we returned to the bus, we teased captain. Throughout the process, he was very calm.

“See I know these people, don’t argue just pay if not you’ll sleep there,” he said. Sounds close to home.

A Laissez-Passer a document allowing the holder to pass. It’s a kind of permit.

The last time we had driven through Guinea on our way to Liberia, we had been extorted at various checkpoints. This time, there was no difference. First, there was a 140,000 fee for some document we had gotten the last time in Guinea which had purportedly expired three days after it was issued. One of the officers liked Tosin’s face; he gave her his number and told her he was coming into Conakry soon. It was harmless flirting and Tosin indulged him so the fee was waived. Exactly 20 seconds later, we were stopped again and asked to pay 50,000 for yet another stamp on our Laissez-Passer. Immediately after, at a post right beside it, we were asked to pay another 50,000 for registering the vehicle names in a book. By noon, we had spent two hours trying to get into Guinea.

Conakry is the capital and largest city of Guinea.

When You Get To Guinea

Once you get into Guinea there’s a stretch of perfectly good road for exactly six minutes. Three minutes in, and you start to see evidence of the mud being trailed in on the left side of the road. Six minutes in, it starts to go to shit getting progressively worse as we proceed. The tarred road gives way for what is essentially a dirt road with occasional patches of tar.

Fifteen minutes into our drive, we were stopped again at a custom’s outpost and asked to pay 10,000 Guinean francs to pass through. The bus was searched again. We overheard the person conducting the search asking Captain for more money. He said he had none, so he came over to Tosin’s side and she indulged him. Immediately she did, the other sharks smelled blood, and two more officers showed up asking for money. They didn’t bother giving us a bullshit excuse; they went straight to the point — they just wanted money. Tosin shelled out 10,000 Guinean franc each. At this point we wanted to get into Conakry as quickly as we possible.

We’ve heard about the unrest in Conakry but none of us is very worried. We’ve heard reports of a protest planned for Wednesday, Tosin and Captain and our contacts in the country want us out by today. Fu’ad, Kayode and I are curious to observe what happens when citizens in a country like Guinea organise a protest. Up until now, we’ve not witnessed any sort of conflict in the six countries we’ve passed through.