Nigerians are Ivorians, Ivorians are Nigerians 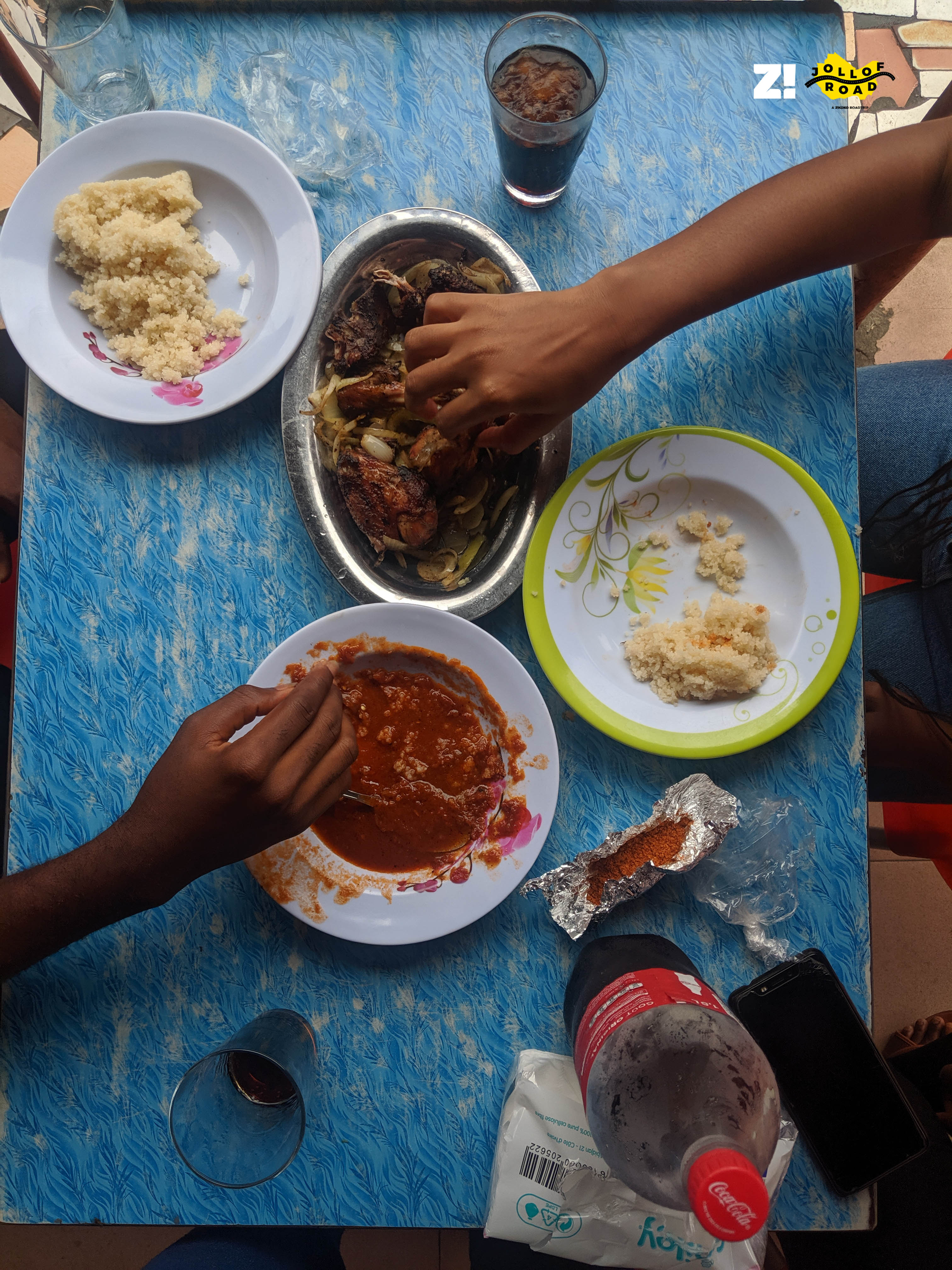 Yesterday, Toke talked about about Ivorian hostility in her journal entry. Today, I will present a counter-argument in some part of my entry.

It starts with our slightly rude hotel staff. We’re entitled to only two breakfasts — one per room. But that’s not even the problem. The problem is that the restaurant staff kept asking Toke and Tosin if they actually lodged in the hotel.

But let’s move on from that, and go to Chez Abdoul. It’s the place that makes badass Attieke and Chicken.

It’s actually pronounced Acheke, and is a big deal in Cote D’Ivoire. The standard combo is with grilled fish, but we have ours with grilled chicken. Grilled over fire by a Nigerien, who somehow found himself trying to make a living in Abidjan, but doesn’t like pictures very much.

While we’re rounding up lunch, two Ivorian ladies, strike up a conversation. “Hello” works in almost every language. We get talking and laughing, and 10 minutes later, we’re playing a game of “I’ll speak bad French, while you’ll speak bad English.” Love it.

We ask them about places to see in Abidjan, and they recommend dropping by at DJ Arafat’s memorial. He’s the Entertainer who died in a bike accident in August 2019, and is somewhat of an idol here.

And true to it, at the memorial, there are plastic flowers, a sign, and a candle sitting in a cupboard that never goes out. How? Some hardcore fans are there to make sure the candle never goes out. Forever. Until the government erects a statue and makes a proper memorial at least.

We meet a man not too far from the memorial who strikes a conversation. His name is Destmo. “I work in media business,” he says. “Ah, c’est bon,” I respond. His struggle-English, and my struggle-French go on for the next 10 minutes. The game continues.

He tells me about bringing Chidinma to Abidjan for an event, about knowing where Yemi Alade’s house is, about having every artist in Abidjan on speed-dial.

The conversation eventually ends, and we head to Comptoir des Artistes, a concept store that has great art, jewellery, and premium chocolate — Proudly Ivorian.

There, we have two great hosts, Francis and Stephanie, and somewhere in between our conversation with them about Cote D’Ivoire, Nigeria and life, Toke says, “Nigerians are Ivorians, and Ivorians are Nigerians.” She’s right. There’s some semblance in the food; we eat a lot of cassava and in the driving; we’re both mad people. And this is where my counter argument comes in — Ivorians aren’t hostile, they’re not just Ghanaian, or Togolese, or Beninoise who were thoroughly and overly welcoming. They’re Nigerians, or very much like Nigerians.

Sometime into the evening, we head out to Aboussan – a restaurant in town, where the prices on the menu give me a heart attack. So we do the other thing: street food. Toke doesn’t like the smell of the gutter, Kayode and I don’t even notice.

When we’re done eating, we head out again, and find a pretty bar that throws the craziest part in Abidjan every Sunday: Bazakh. One of the people running the place recognises us from the bus. He’s not been following, but his friend is. This makes us glad.

Today, we see more of Abidjan. I’m rooting for super chill people and lots of Attieke.