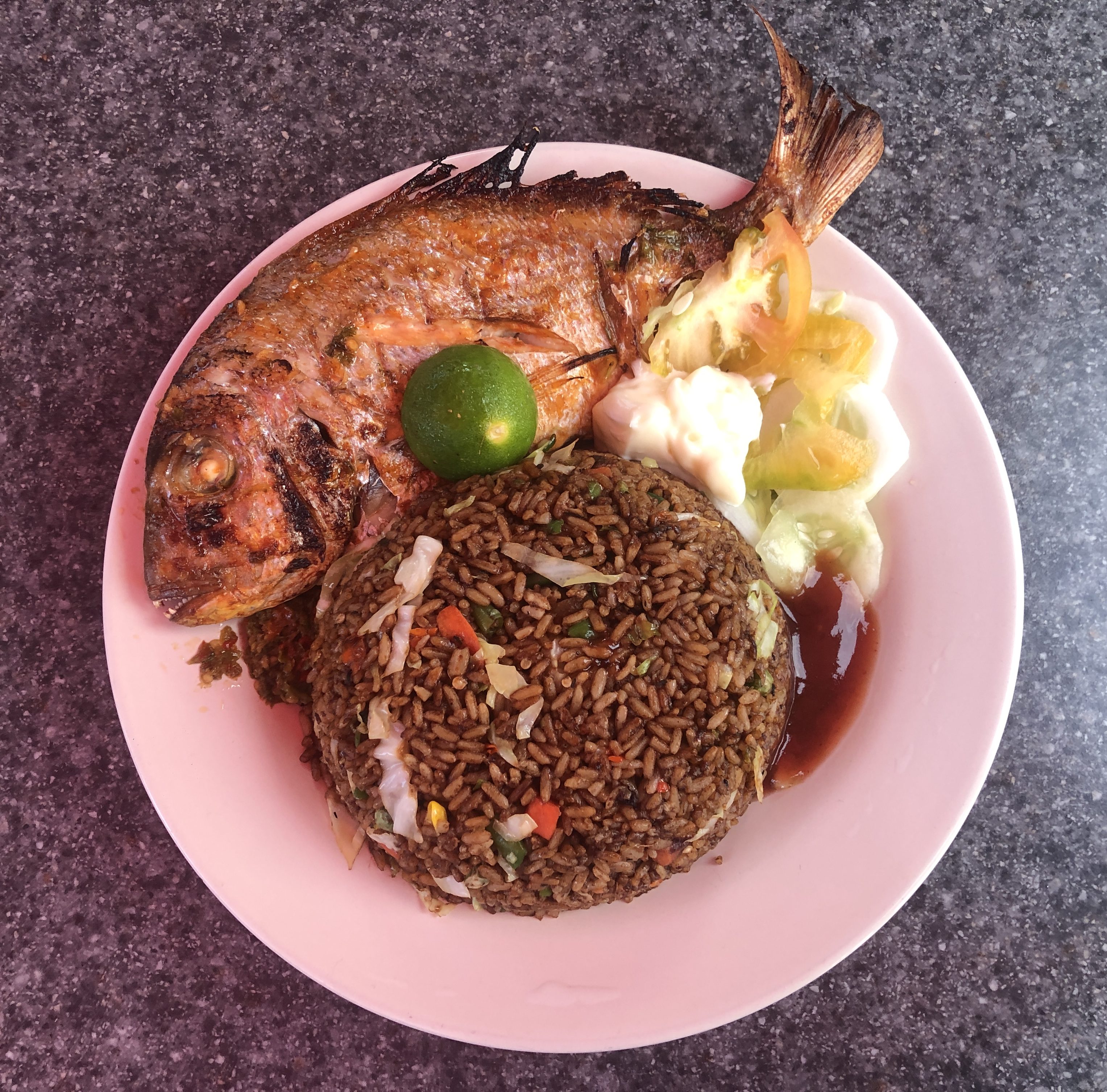 For most West Africans, the only other food that can compete with Jollof Rice is Fried Rice. Just like Jollof, most West African countries also have their variation of Fried Rice. I tried it for the first time in Ghana, and while it looked and tasted like the fried rice I was accustomed to eating in Nigeria, I just wasn’t blown away.

Fried rice as I know it, is made with chicken stock, vegetable oil, carrots, peas, sweet corn e.t.c. and looks like this:

Carrot, peas, sweet corn and all of that jazz can also be found in the Sierra Fried Rice, except that it looks like this.

When my meal came, I remember telling the rest of the gang that I found it odd that Jollof rice was called Fried rice in Sierra Leone. Because to me, anything that looks like this has to be Jollof rice. Fu’ad didn’t think it was Jollof rice however and one fork in I had to agree. It wasn’t Jollof rice, but it also didn’t look or taste like the Fried rice I was familiar with, so what was it?

As we’ve travelled through the countries trying all the foods we have in common, they’ve not always tasted the same or had the same name, but they’ve mostly looked the same.

So I asked Masera, the bubbly 18-year-old Sierra Leonean waitress who had been waiting on us, first if the Chef was Sierra Leonean. My first theory was that he wasn’t. There’s a large Lebanese community in Freetown so maybe this was some sort of Lebanese cuisine. But Masera said he was Sierra Leonean so I asked a question only a foreigner could – ‘Are you sure this is Fried rice?’. She laughed and said, “Yes, this is what Fried rice looks like here”. Not completely convinced, I followed up with “So this is not Jollof?” She replied that it wasn’t, and that Jollof wasn’t prepared the same way. When I asked her which she preferred she said Fried rice. While I’m yet to try the Jollof here, the Fried rice absolutely blew me away. So much so that instead of us to go looking for Jollof, we lost the plot and had it for lunch two days in a row.

The Fried rice was made up of a unique blend of spices that didn’t taste like any Fried rice I had tried before but somehow managed to taste familiar.

We tried to get the chef to come out and answer all of our burning questions, but he was too busy whipping up magic in his kitchen so I did some digging and found out here that Soy sauce might be the answer to all my questions about the unique look and taste of their fried rice.

As we ate, we got talking with Masera, the bubbly waitress who had patiently indulged all of our stupid questions. When she got comfortable enough she started to ask Tosin questions about Nigeria and how the education sector works there. She wanted to know if she could go to Nigeria to finish her education. When Tosin asked why she replied that education was too expensive in Sierra Leone. When she got to SS2 she had to drop out because she simply couldn’t afford to pay the fees. When we asked how much, she replied ‘le 800,000’. The number took us back at first but when we did the Math we realized it was the equivalent of just about 29,000 naira ($80).

Today, we find Jollof and maybe stop by to see Masera one last time.

Side note: We found a knockoff KFC called CFC and instead of Colonel Sanders, an African looking man is on their logo. And for some reason, I found it very funny.