Voodoo And Witchcraft Are Not The Same Things 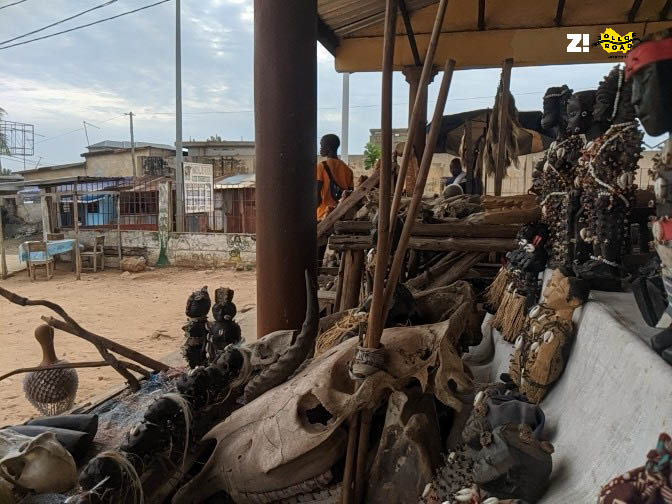 9 out of 10 movies produced in Nollywood – the moniker for Nigeria’s film industry are centred around voodoo and witchcraft. Plotlines featuring money rituals and love potions are not at all foreign to the average Nigerian and a large per cent of West Africans who consume Nollywood movies.

Movies such as ‘End of the Wicked’ and ‘Igodo’ are cult classics centred around voodoo and witchcraft. What’s commonplace in these movies is how voodoo and witchcraft are portrayed to be ‘forces of darkness’ that need to be overcome by ‘forces of light’. But how much of the plot lines are steeped in reality and how much of it is just fiction? Yesterday we went to the only place we could find answers in Togo – Akodessewa Fetish Market, the only fetish market in West Africa. And had an intriguing conservation with a modern-day voodoo priest.

With Voodoo and Witchcraft, it is not exactly potayto, potahto.

According to our guide – Ahosi who comes from a long lineage of Voodoo priests and is also one himself, Voodoo and witchcraft are two words often used interchangeably, even though they connote two very different things. While Voodoo is a religion, witchcraft is a practice which often involves all of the messiness you see in Nollywood movies, from money rituals to the smithing of enemies in calabashes. Think about it like Harry Potter. Voodoo is Dumbledore and his army, while witchcraft is Voldermort and his army.

Of Voodoo and Christianity

We first came across the Vodun people – Voodoo worshippers in Benin at the snake temple. Where we found out that a number of voodoo worshippers had no problem popping by the church for two quick ‘Hail Marys’ and one ‘Our Father’ right after leaving the temple. We didn’t get the opportunity to meet anyone like this so we asked our guide about it and he was politely disapproving.

The way he sees it there’s absolutely nothing wrong with being a Christian, but you couldn’t be both Vodun and Christian. According to him, there’s one almighty God and the only difference between Christians and the Vodun was in the way they worshipped him.

I grew up Catholic and while I was taught more subtly than some other Christian denominations that the souls of people like the Vodun were eternally damned and they were on a one-way street to hell, I was still taught repeatedly over the years.

In some other denominations, the Vodun aren’t even seen as people whose souls need saving. They are the enemy, the cause of many a misfortune upon good practising Christians who need to be prayed against. You might argue about this but it’s the plot of every other Mount Zion movie. Which is why I found it so interesting that unlike us Christians the Vodun people are raised to be more religiously tolerant.

Asides his views on Christianity, I had a couple of other pretty important questions for Ahosi. These were the most burning questions I had about voodoo, and I’m pretty sure they’ve crossed your mind too.

Yes, they do, but money rituals aren’t Voodoo, it’s witchcraft. It’s also kind of how we’ve seen it portrayed in the movies. Not with snakes vomiting dollars but with the way it always ends in tears. Although he didn’t mention anything about having to sacrifice your mother’s left leg or your firstborn son he did point out that it was impossible to do money rituals and escape negative side effects. He didn’t say if there were minor like losing a toe or major like your whole family dying in a plane crash.

You could, however, use voodoo for good luck and sometimes money follows good luck.

Can I use Voodoo to disappear from Nigeria and land in Canada?

Sort of. You could use Voodoo to pull a disappearing act but I’m not sure you could get enough mileage to get you to Canada. The process is a little complicated and involves you journeying into the fetish forest. You can’t just flick a wand or snap a finger. You also lose a year of your life every time you pull a disappearing act. Now if only this could happen to every lover who ghosts on you.

What kind of charms can I get?

A ton. Charms are kind of their speciality.

There are a lot of medicinal charms for everything for chickenpox to asthma, there’s also traditional vaccination against things like snake bites.

A couple of love potions. The one I found most fascinating was this.

Here’s how It works. If you are a couple, you put some perfume on the charm put both your hands over it then take the perfume from the charm and douse yourselves in it. When you are done you toss the charm in the ocean and your love lasts for all eternity.

Now, where it got even more interesting is how it works for single people. If you are single and there’s someone you like, who let’s just say hasn’t noticed you yet, you get the charm put some perfume on it and speak the person’s name over it. Transfer the perfume from the charm to your body and the next time you see your love interest, they’ll instantly realize you are actually their long-lost love.  The charm won’t work, however, if the person you are interested in is already involved with someone else. Voodoo stands for many things, but infidelity isn’t one of them.

A couple of good luck charms, which by the way you have no right to turn your nose up at if you were one of the people who voted in Buhari for a second term because you thought he’d do any better.

A whole lot of aphrodisiacs. Even though I thought the combo of a dead bat, the penis of a sheep, and alcohol was doing a little too much to keep a hard-on. There were, however, a couple of less dramatic options.

Today we are going to take a walk on Togo’s endless coastline and find out what Togolese Millenials get up to.