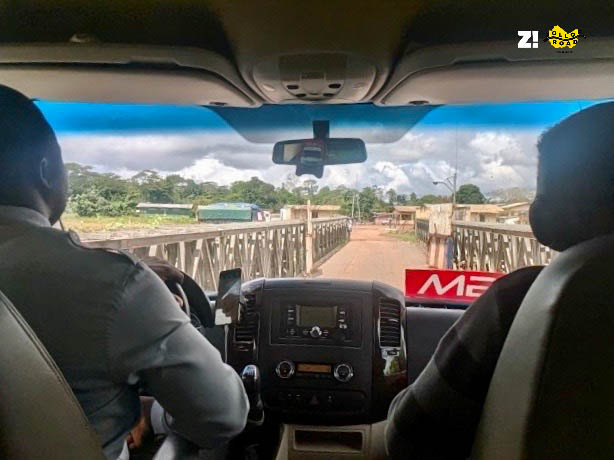 Day 31, that’s when I expect our itinerary to start going to shit.

When we woke up yesterday, we had one agenda, head straight to Monrovia, the capital city of Liberia. No pit stops. There were a couple of reasons we were so enthusiastic about crossing the Liberian border. First of all, none of us had crossed it before and Captain had no contacts or agents at the border. The locals we asked about it also had no ideas. But we were in Abidjan which is several hours away from the border, so we were told to ask more questions when we got into Man. When we got to Man, it was the same thing. Most people we asked simply replied with a blank stare. One local pointed us in the direction of a convoy that made a daily trip to Liberia at about 8am every morning. I panicked a little at this news. Why did we need to follow a convoy? Was it safe? They said it was, the only problem was that the road was very bad.

We set out at 7 am, amidst Captain’s complaints that we were late. We drove for two hours on fairly bumpy roads. No Nigerian could possibly consider them as very bad going by what we are used to, until we got to a customs checkpoint. At the checkpoint, a customs officer told us that if we kept going straight we were going to end up in Guinea and that we needed to make a left turn.

The only problem was that the left turn he was referring to was an abrupt split off the tarred express road to what can only be described as a bush path. Except this bush path was hundreds of miles long and ended up being the most uncomfortable 90-minute drive we embarked upon since we set out on Day 1. We drove through villages that would make any white person’s saviour complex leap for joy until we came to a stop at a makeshift barricade made up of a single mangled rope and two concrete buildings. We argued amongst ourselves: could it be the border or another checkpoint? Turns out it was the border.

We got out of Black and let Tosin work her French magic. Getting our exit stamps was almost hassle-free. We asked about the road to Liberia and they told us it was worse than the one we’ve come through. I laughed because I thought it was simply impossible. We collected our passports and yellow fever cards and made our way to the Liberian end of the border.

When we got there, there was no barricade, only two female officers standing at the end of a small metal bridge. They stopped us and asked us to disembark while Captain Taiwo parked Black. After inspecting our passports one of them asked for a ‘tip’. We told her we had no money and even happened to be looking for an ATM. She laughed. The nearest ATM was miles into Liberia. Given that every border we had been to was abuzz with commercial activity, this was a new experience for us.

After deducing that she won’t be getting anything from us, the female officer led us to a room with a wooden desk that had ‘travel documents presented here’ printed across it. Four immigration officers pored over our travel documents. It was pretty obvious that the foot traffic they got through the border was pretty low.

After asking us the standard “who are you and what are you here for?” questions, they led us to another room to get our passports stamped. We asked about the road again and they say it was very bad. One of the officers took a look at our vehicle, shook his head and told us it was too low to pass the road and that we were going to end up coming down to push it. He laughed as he spoke, and so we laughed with him as we got our passports stamped. That was where we met Betsy Johnson, the most pleasant immigration officer we had ever come across. She made small talk with us and teased me about my unending names. She asked why we had come to Liberia and we gave her a short summary of Jollof Road as she inspected our passports.

The prospect of us coming into Liberia to tell their stories pleased her. She encouraged us to meet up with their local press. What was left unsaid was that they needed all the good press they could get.

16 years after their second civil war, Liberia is yet to shake its image as a war torn country. The Ebola outbreak that followed 11 years later has not helped in portraying it as an ideal tourist destination.

Just as the last stamp was put on our passports, Fu’ad who had gone off with Captain to help sort out papers for the car came in to say we had to turn back. We though he was joking at first. It was 11 am, it had taken us four hours to reach this spot. We had just gotten our passports stamped, we had been welcomed into Liberia.

“It’s impossible to pass the road,” he said.

When we told Betty Johnson we had to turn back on account of our bus, Black and the bad road that rendered it impassable, she nodded and said, “Oh, no way that bus could ever go through that road” and proceeded to stamp us out of the country. I imagined this same scenario playing out in a Nigerian immigration office.

Officer: You just entered the country now you are telling me you want to be going? You think you can just be coming and going as you like? Where do you think you are? You think this is your father’s house?

We pestered Fu’ad about the video he saw. We had to see it too. Just how bad could it be? I had travelled from Lagos to Enugu during the rainy season by road before, I was sure I had seen worse. We tracked down the kind Liberian stranger who had shown him the video and asked him to show us. He laughed as he showed us the video. Turns out I had never come across worse roads. We asked if he could send us the video and he graciously accepted. We collected it and headed back to the Ivorian side of the border. Betty Johnson told us she loved us and hoped to see us soon. I asked for a picture, but it’s against protocol.

At the Ivorian side of the border, they were equally as understanding. Everyone knew how bad the road was. Cars that got stuck in it could remain there for days. We got stamped in again and an immigration officer asked us to line up in front of the bus and took our picture. When we asked what for, he said it was to send to the other border. There’s nothing more suspicious than leaving a country, spending 30 minutes in another country and reentering the country you just left. He sent our picture ahead, just so they won’t give us any hassle. We said thank you, chatted with a police officer called JB who barely speaks English but is a Joeboy and Adekunle Gold fan before heading on our way.

It’s 6 am now. In 30 minutes, we’ll head for Guinea. Get stamped into Guinea, get stamped out of Guinea and be back into Liberia again.