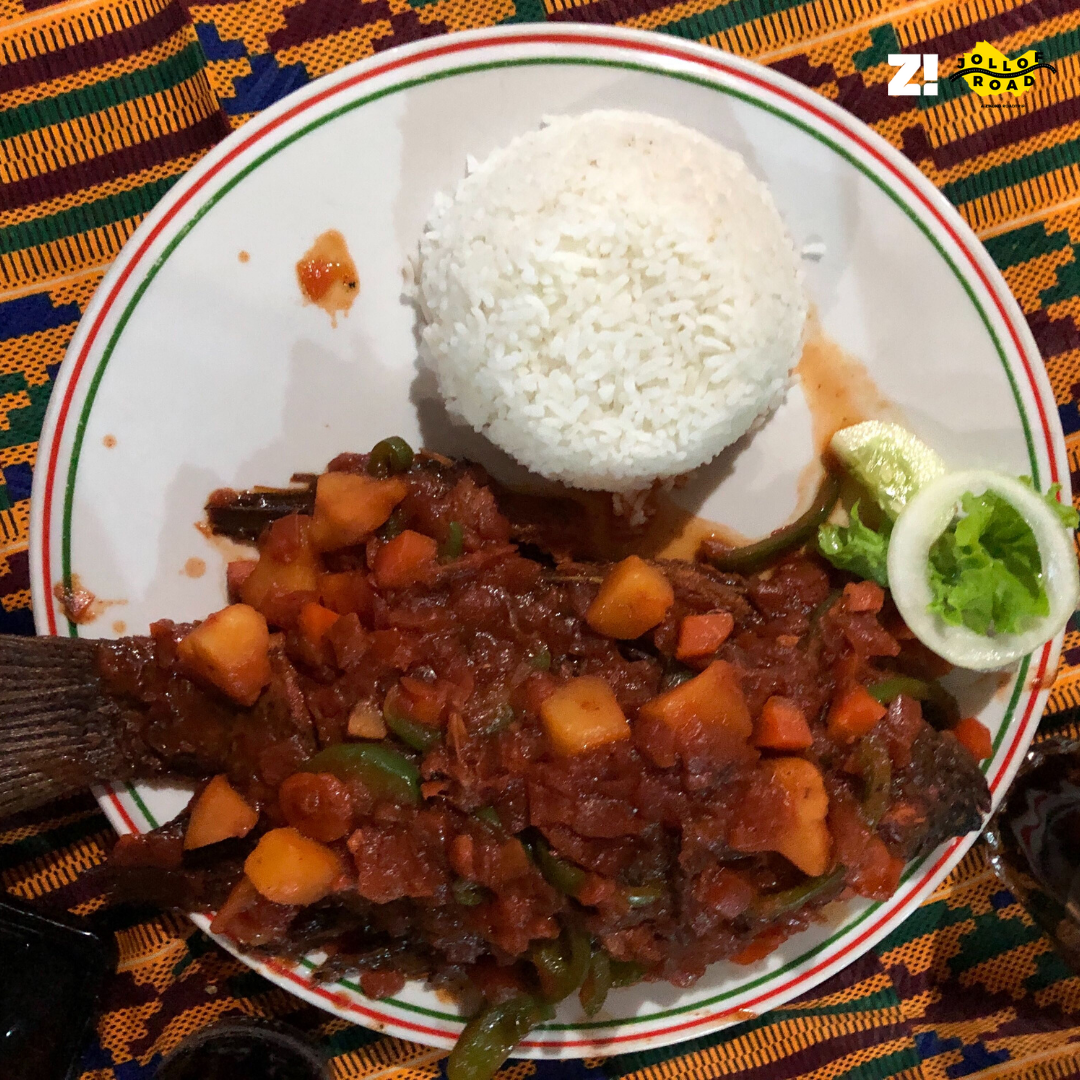 Rice is a staple in West Africa.

Beyond Jollof rice, West Africans consume rice in as many forms as we can. Plain old white rice with sauce or stew, fried rice not to be mistaken with fry rice which is a whole other thing, tuwo and masa, the list is endless. We’ve talked a lot about how similar our food is across the region.

But one thing we never come across is rice and stew. There’s a lot of rice and ‘sauce’ but no stew. The sauce is usually made with a lot of onions and spices with either fish or chicken but no tomatoes, no ata rodo (fresh pepper).

We stumbled on rice and stew once at the start of the trip at a roadside Buka somewhere in Benin, but Benin has a large Yoruba population so that was not surprising.

We had gotten so used to the onion sauce, the stew took us by surprise. There was still a lot of onion in it, cut in large chunks so you can’t miss it even if you tried, but there was tomato and pepper. And it came with a side of alloco which is exactly like dodo but so much better, and it was heaven.

There’s a great chance it wasn’t half as good as we thought, but after 66 days on the road, away from home, family and friends, the food also tasted nostalgic. We had rice and stew for breakfast again yesterday. We didn’t request it, we just ordered riz et poisson (rice and fish) and it came with stew. Which led me to believe that stew might be a staple here. I think it could be because we are getting closer to Nigeria, but Jollof is still Thieb here, so probably not.

Down The River Niger

We took an idyllic sail down the river with Issam who graciously hosted us in his home in Bamako and has been one of our biggest plugs on this trip. This was just after we left the grand Marché, a market in Bumako./

We stopped at the museum earlier in the day and I was envious of how carefully curated and maintained it was. The last museum I went to in Nigeria was the National Museum in Enugu. There, everything was covered with several layers of dust and we had to use the torches on our phones to light up some chambers were the bulbs had probably been out for years.

The National Musuem in Bamako in contrast was a delight. It wasn’t perfect but is the most impressive I’ve come across yet in this region. They had a section on Malian textiles and I spent a pretty minute there feeding my newfound obsession with their traditional fabrics. From Basin which is Batik, to the mud cloth to Koba which is a lot like aso oke.

We didn’t get nearly enough time in Bamako. Prior to the trip, a couple of people we asked about the city had spoken derisively about it. ‘There’s not much to see or do,’ they said dismissing it.

But there is, a whole lot more than we could see in 48 hours. When this trip is done, I’ll be back.

Today we gun for Ouagadougou, Burkina Faso. According to the map, it is going to take us 14 hours. But we are crossing a border and if there’s anything we’ve learned on this trip, it’s to add several more hours, sometimes days on time estimates.

If we fail to hit Ouagadougou, we’ll stop over Bobo-Dioulasso, Burkina and try again tomorrow morning.