There’s A Surfers’ Town In Liberia 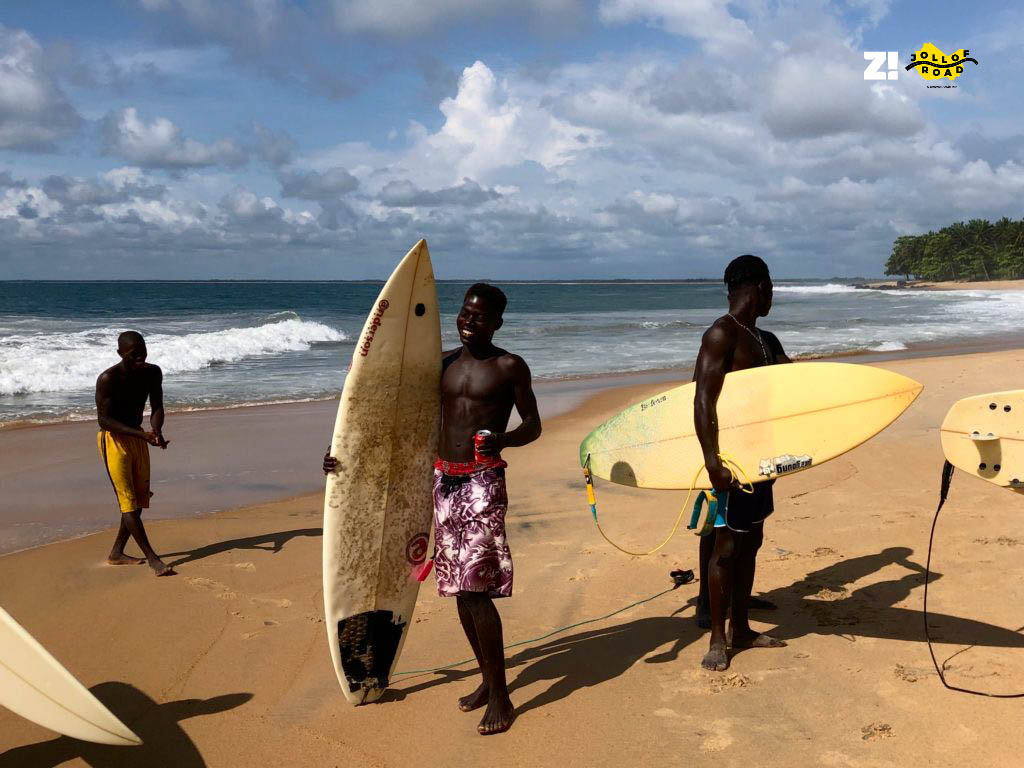 Not too far away from the border between Sierra Leone and Liberia is a relatively small town called Robertsport. The town is known for its rice farmers and fishermen. What many people may not know is that it’s also a surfer town — a large community of almost a hundred native Liberian surfers call Robertsport home; we came here to find them. We got in too late to catch anyone surfing but we caught the most beautiful sunset, took a walk by the beach and settled into an actual wooden cabin in Nana’s Lodge.

The curious case of a Robertsport hotel

There are not many good hotel options in Robertsport. There’s Nana’s Lodge the most popular one with wooden cabins by the beach and Grassfield hotel which Fu’ad took one look at and declared we couldn’t stay.

We discovered this hotel after bumping into Alan and Slavar who were at Robertsport to kick back for a few days. They told us the hotel had a bar, nicer lodgings and better rates than Nana’s Lodge. It was their second day here and they quite liked it. So off we went.

At the hotel, we met Hugo the manager who told us the hotel wasn’t open for business yet. We didn’t mention that we’d run into Alan and Slavar. We told him we were travellers who wanted to bunk for one night. He insisted they were closed and told us to come back in a couple of weeks. At which point we asked if this was the same hotel Alan and Slavar were staying at. He said yes and offered no other information.

As we headed back to Nana’s lodge, we ran into Alan and Slavar. At first, they were confused when we told them that the manager said the hotel wasn’t open. A couple of minutes into the conversation they came in with a quick save about it still being under construction and the hotel only having three usable rooms two of which might be occupied. None of this information was offered to us by the hotel’s manager. At this point I should probably point out that Alan, Slavar and the hotel manager are all individuals of the fairer skin.

As we walked back to Nana’s Lodge, Fu’ad, Tosin and I went back and forth about the discrepancies between the stories we’d just heard. Fu’ad thought it was a kinship thing and the manager might be doing Alan and Slavar a favour. I countered that they had paid for the rooms and if the manager was doing them a favour, they won’t have pointed us in the direction of the hotel. Tosin thought the whole incident was off and didn’t know what to make of it. I concluded that for whatever reason, the manager just wasn’t interested in our patronage.

As we took a walk by the beach this morning I ran into two more guests staying at the hotel. They were also white.

Every Liberian we’ve come across since we got into Liberia has waxed lyrical about how good their Jollof is. And while we’ve come across some pretty good Jollof, we haven’t come across anything that really blew us away. Last night at an unsuspecting bar somewhere in Robertsport we found the best Jollof Liberia had to offer. And it looked and tasted very Nigerian.

Maybe I’m just biased because it’s the most Nigerian tasting Jollof we’ve come across on the trip. Or maybe the presence of plantain in my food was what clouded my judgment but we all came to the same consensus it was really good Jollof.

We were supposed to head to Freetown this morning but none of us wants to leave without a chance to see the surfers surf. As I write this, we are having a breakfast of toast and the most perfect eggs as we watch the rays of the sun bounce off the waves at the beach while we wait for the surfers to show up.