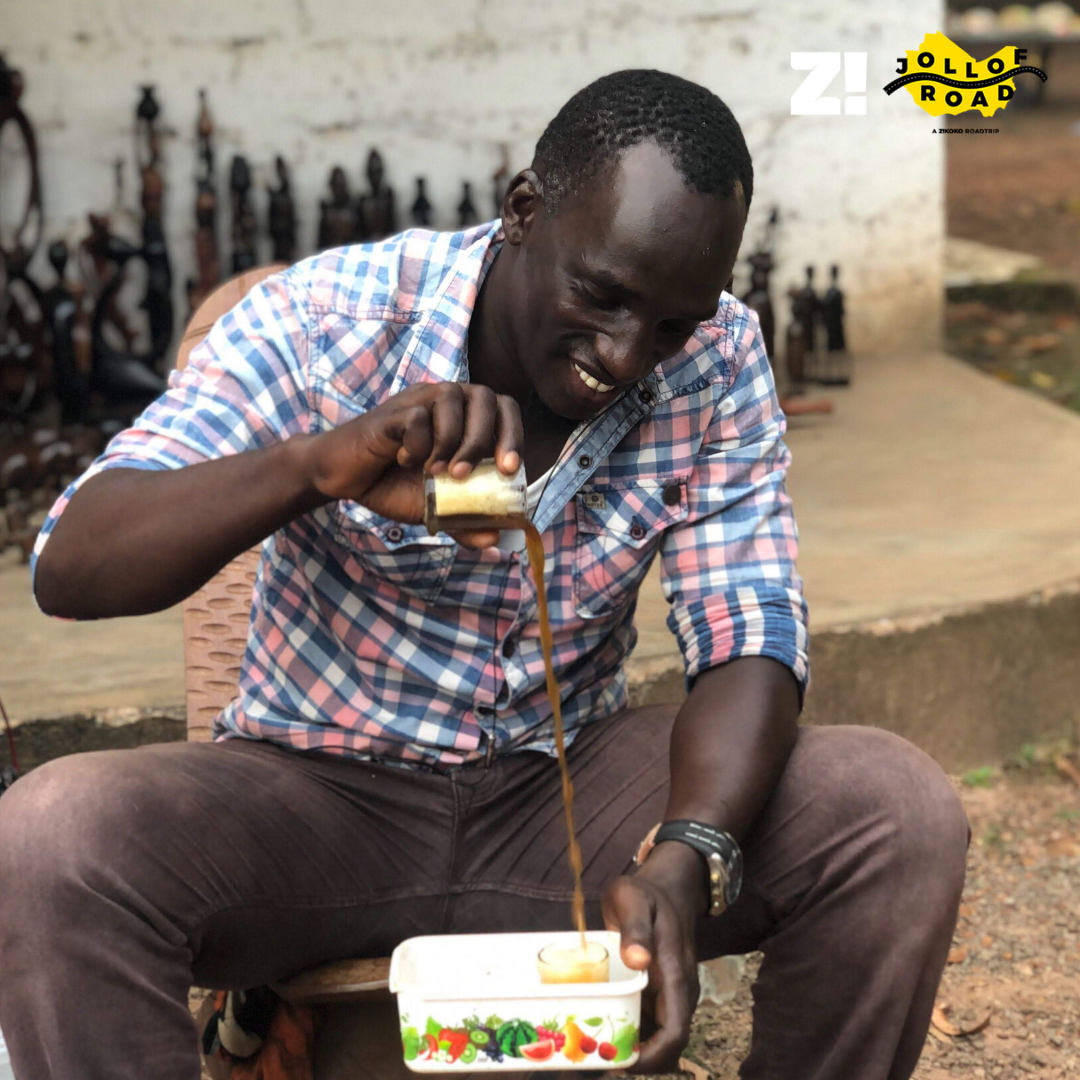 With a population of 1.8 million people, Guinea-Bissau is the smallest country we’ve been to yet. And it’s Capital – Bissau, the tiniest city I’ve ever seen. After discovering that number, I kept coming back to it all through yesterday. The last official report put Nigeria’s population at about 195 million. Even though our country is grossly overpopulated, it was hard for me to imagine how only 1.8 million people could occupy a country. I was pretty sure 1.8 million would only make up a quarter of Lagos’ population. I looked it up and found out I was wrong. Alimoso, a single LGA in Lagos is already about 3 times it size.

So how do you spend a day in a country where you could run into the president’s wife at a supermarket at least once a week? You start with the market and end it with food.

The biggest market in Bissau is Bandim. We headed there yesterday with no particular mission. First thing that caught our eye was a man making and selling handmade slippers. He was using real leather and they looked pretty sturdy. With very little bargaining we walked away with two pairs at the equivalent of a thousand Naira each.

Then there was Anna

Right by the entrance of the market was a sea of women selling a local cake called Bolo. She was the only one smiling, so naturally we went to her. She spoke only Portuguese but we managed to communicate that we wanted a couple of slices, pay and get her to smile shyly for this photo.

I was pleasantly surprised by how good the cake was. It was moist and sweet, maybe a little too sweet. And tasted nothing like I’d expect street food cake to taste like. I won’t name any names but I’ve had worse in many a bakery in Lagos and that’s all you need to know about Bolo.

We were walking through the market when saw a gaming center. Dozens of screens on ramshackle tables with boys ranging from the age of 10-25 playing games. Kayode got talking with one of the gamers and found out that each little table belonged to different owners. Just before getting trashed in football and blaming it on the game being too old.

What even is Jollof?

Up until this trip, I had a very limited view of what Jollof was. The different variations I’ve come across, though still subpar to Nigerian Jollof, (that’s right I can take shots too) have fascinated me. With the most fascinating being Thieb Blanc which looks nothing like the Jollof that a lot of people are used to. Some might even argue that it’s not Jollof. But it’s made with rice and tomatoes too. The missing ingredient is tomato paste which is why it’s color is so pale. I’ve found Thieb to be one of my favourite variations of Jollof yet and we found out that it’s what Guinea Bissauauns call their own Jollof too. So do Senegal and Gambia. The secret to Thieb for me is that onion sauce you see on top. If someone built a startup today that was like Uber but for that Thieb sauce, I’d put all the kobos in my account behind it.

Afternoon tea with a stranger

Warga is a sweet green tea I noticed for the first time in Guinea. Captain mentioned that he had also seen it being made in some communities in Nigeria. We had stopped for the umpteenth time to ask for directions when I saw a man pouring some tea from a kettle into a cup and back into the kettle. Then from one cup into another cup, over and over again. I started counting and got to 30 before we left and he was still pouring away. I saw it again yesterday in a little art village here in Bissau and Mohammed who you see in the picture above was kind enough to share his afternoon tea with us. When we asked why it’s poured so many times he said that’s just how it’s made. I’ve never been a tea person, but Warga could easily convert me. I just don’t think my arms have the stamina to withstand all that constant pouring.

There’s an Art Village in Bissau

One of my favourite things to do is collect quirky art pieces in as many places as I can. In Benin, I got a couple of tiny bronze figurines and in Sierra Leone, I got batik paintings. Stumbling on a whole market of things like this while looking for Jollof in Bissau might be the highlight of my stay in Bissau. That’s where we met Abu who possesses the complete set of infinity stones you need to survive in Bissau – the ability to speak fluent French, English and Portuguese. We told him he was the first Bissauan we had come across who spoke all three so well and he shrugged offering no other information. We didn’t press because we suspected he’s a private man. We bought a couple of things from him partly because he’s a great salesman and mostly because he had the fairest prices and most of the other store owners are extortionists. So if you ever find yourself here, here’s Abu’s number, tell him his Nigerian Jollof friends said hi.

Fun fact: Even though its official language is Portuguese, a large number of people in Bissau speak French too.

One of the most interesting things about Guinea-Bissau is Bissagos – a group of islands a little off its coast. We got talking with another Mohammed last night, this time a Lebanese man running a travel agency at what might be our favorite food place in Bissau and he told us about how some of the islands in Guinea-Bissau look like Hawaii. In his experience a lot of foreigners come into Guinea-Bissau and head straight for the islands, not bothering to stop at Bissau because there’s just not much to see or do. With one more day to spend in Bissau we asked which one he’d recommend we visit. He rubbed his thumb against his forefinger and middle finger and told us that it depended on our pocket. We all had a sneaking suspicion our pockets might be too thin for any of them but today, we venture to Bissagos.

Random fact: Danfos are to Lagos as Toca-Tocas are to Guinea-Bissau. Instead of yellow and black they all have the same uniform blue and yellow paint jobs. Interestingly, the seats face each other, like you’d find in some airport shuttles.